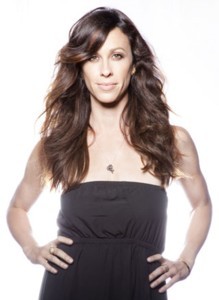 Take the time to listen to the songs of Alanis Morrissette and begin to appreciate and feel her fury and rage with life. Each song is performed perfectly though her creative and unrestricted expressions to capture her rebellious mood and feelings.

Where’s all the anger gone now? Well she is in her mid 30s and I guess maturity, tranquility and a bit of wisdom is starting to set in. She’s still the vocal — ‘Get out of my way I’ll do whatever I want’ Alanis. But now she’s found a way to creatively channel that energy into other worthy causes, like helping to Green the earth and environment.

In 2003, Alanis was recognized for her commitments to environmental causes. She was awarded the EMA Missions in Music Award for acts such as speaking out against drilling in the Arctic National Wildlife Refuge.

In 2005, Alanis Morissette narrated the PBS documentary Global Warming: The Signs and the Science. In the documentary, she outlined the growing evidence of our world’s changing climate and the necessity for us to act now to make a difference for the future.

In 2006 she teamed up with Keanu Reeves to narrate another film, The Great Warming. Many from the religious community got behind the film and pre-screenings were held in churches, creating a new breed of evangelical environmentalists. The New York Times called it “a straightforward, quietly persuasive primer on the climate change crisis” and said it should be required viewing for everyone.

Recently, in the lead up to Earth Hour (Lights Off for 1 hour). To help promote this world wide event, she stars in an advertisement where she is cutting her toenails in first class during her flight. What a “Turn Off”. That’s exact the message Alanis wanted to get across to the world. “Turn Off” all lights during Earth Hour. Very clever!

Moving into the fashion scene, it was recently announced that Alanis Moresette and Woody Harrelson have teamed up by extending the lifestyle of “living green” with an exclusive line of recycled denim called Reco Jeans.

To educate and entice all types of people to want to aid change via Reco recycled denim, the Reco Jeans image of “eco-friendly” offers a variety of designs, ranging from classic clean silhouettes to bold exotic accents. Reco have already been certified by Hong Kong Green Label and also obtained a white paper from Hong Kong Polytechnic University.

The Eco detailing work of the Reco Jeans is something worth noting:

(shipping purpose): made from recycled materials

Gift Box: reuse-able, 100% recycled paper Labels: We have eliminated the number of the labels (size, name, style, care, fit, size stickers and etc) you see on most jeans, and narrowed it down to only 2; care label and the style name patch

Can’t wait till the Reco line hit’s the Australian shores. If you can’t wait, take a visit to the Reco website and grab yourself a pair. The styles are extensive and quite impressive.

Do times change! For someone that seemed to have so much anger for the world is now at peace with it. “Isn’t It Ironic…. Don’t you think?”