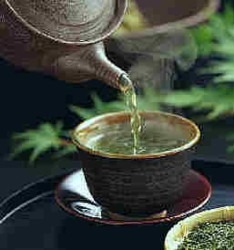 Since ancient times, the Chinese have known about the health and beauty benefits of green tea.

Green tea is also high in vitamins C, D and K, as well as riboflavin, zinc, calcium, magnesium and iron. A cup of green tea a day will help keep the doctor away.

Green tea contains potent antioxidants called catechins, and tea extract is proven to increase antioxidants activity in the blood. The active ingredient catechin, has been found to outperform Vitamin C and beta-carotene ten times in scavenging the alkyl peroxyl radical.

Protecting against the effects of ionizing radiation and ultraviolet radiation.

Green tea has proved to be anti-bacterial that reduces inflammation, decreases hormone activity, capable of killing the potentially deadly Staphylococcus Aureus and the bacteria that cause Bacterium acne.

Green tea’s antioxidants have been shown to be highly beneficial to acne prevention. These antioxidants help your body to fight against free radicals that cause damage to cells and tissues in your body. Green tea therapy is less toxic and has fewer or no side effects as compare to other drug based products.

One study, performed in 2003 by Dr. Stephen Hsu (a cell biologist) of the Medical College of Georgia Department of Oral Biology, found that green tea was able to rejuvenate old skin cells that were at the end of their life cycle.

EGCG reactivated dying skin cells. “Cells that migrate toward the surface of the skin normally live about 28 days, and by day 20, they basically sit on the upper layer of the skin getting ready to die,” Dr. Hsu said. “But EGCG reactivates them. I was so surprised.”