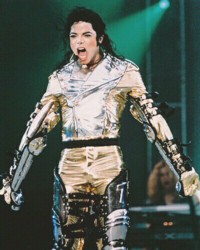 Congratulations Michael Jackson, you have won the Green Organics Green Celebrity of the Month award for June 2009. Now, we don’t hold any big award ceremonies, or have a gold plated trophies for presentation, or any prize money for your winnings.

To others, this green award maybe a worthless accolade not worth a mention. But to Michael, I’m sure he is looking down with great pride and satisfaction knowing that there are people out there who genuinely acknowledge his green and charitable foot print in our society.

One of the most influential pop icons ever sure had his subtle and creative ways to communicate his eco messages across to the world – through his beloved music and dance.

Instead of blabbering in front of the cameras about the harm we are doing to the environment, Michael had a much more effective way using his music to emotionalize the issues we face creating movement and passion inside each individual. This clearly can be demonstrated by songs such as “We are the world” and “Heal the World”. “That’s what I was trying to do…writing those songs to open up people’s consciousness. I wish people would listen to every word.”

Unlike the shallow messages of today’s music, Michael resonated such deep meaning and substance with his song lyrics. His songs almost had a hypnotizing effect on your mind to go out and do good and “Heal the World”. Michael Jackson was famous for his socially-conscious music, but his biggest cry for environmental justice came from his masterpiece – the “Earth Song,”. What influence did this song have? Lets just say the earth song became Jackson’s best-selling song in the UK ahead of “Thriller” and even “Billie Jean”. Below we have a must see video of Michael performing his song and releasing his message out. Listen carefully to all the words in the lyrics.

His contribution to charity includes organizations such as:

Michael Jackson wrote “We Are The World” with Lionel Richie in 1985 and performed it as part of an all-star single to raise money for Africa in 1985. The Millennium-Issue of the “Guinness Book Of Records” names Michael as the “Pop Star who supports the most charity organizations”, according to JacksonAction.com, which has an extensive timeline of Jackson’s charity work.

Watch and listen to the beautifully orchestrated work of “We are the world”.

We give our utmost respect and acknowledgment for the work that you have done in “Healing the World” and making it a better place. Too much of anything can be harmful and if the waste is not channeled correctly it can have dire consequences. I guess stardom has drain you of your energy .

Your fame and stardom came at such a young age and this has evidently robbed you of your childhood. YES….You can’t receive something for nothing. But for a young boy growing up, did you really know the choices you were making and where it would lead you. Instead of playing with fire trucks or cops and robbers with your young friends, you sacrificed your childhood and mesmerized us with your incredible singing, dancing and acting.

Your #1 hit about a rat named “BEN” still triggers deep emotions inside and always has a special place in my heart.

This life story is all behind you now. You are now at peace.

Thank you Michael for leaving us with so many blissful memories. You are truly priceless!

My King of Pop, Rest In Peace.

Love From the Green Organics Team

9 thoughts on “Green Celebrity of the Month – Michael Jackson”