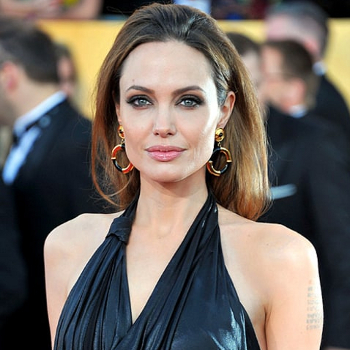 Green Celebrity for April was Brad Pitt. So undoubtedly, you guess it, Green celebrity for May 2009 is our sexy Tomb Raider icon Angelina Jolie. The golden couple Mr and Mrs Smith is out to show the world what the colour green represents and Angie in particular is doing it in style.

Angelina in real life is truly putting on a super hero performance to make a positive difference for the less fortunate. This time, “Lara croft” has a different fight on her hands, a much more difficult fight that actually does involve saving the planet.

We all know that Angelina Jolie is known for her many humanitarian roles. She’s adopted a Tsunami orphan, has given $5 million to fund a wildlife sanctuary in Cambodian , and she holds a respectable position as a Goodwill Ambassador for the U.N. Refugee Agency, which assists around 20 million refugees in over 100 countries.

Angelina uses her status as a superstar to generate media coverage about the troubles refugees face and the conditions under which they live. After seeing the refugees, and conditions of so many, she has never looked at the world the same way. It’s her passion to strive to make an impact. “It’s just such a freeing thing to set these great challenges for yourself, to travel, to learn more about the world, to just go out there and get crazy and get free and get strong.”

In 2006, Angelina Jolie (and also giving credit  to husband Brad Pitt) founded the Maddox Jolie Pitt Foundation or MJP whose mission statement is “to eradicating extreme rural poverty, protecting natural resources and conserving wildlife. MJP promotes sustainable rural economies that directly contribute to the health and vitality of communities, wildlife and forests.” MJP has made initial donations to Global Action for Children and Doctors Without Borders of $1 million each. Jolie also co-chairs the Education Partnership for Children of Conflict, founded at the Clinton Global Initiative in 2006, which helps fund education programs for children affected by conflict.

In 2007 Angelina headed off to France with Brad Pitt to purchase one of the oldest vineyards in the world – the Chateau Val Joanis. The beauty of this 1,000 acre estate is that it still operates using organic grapes from sustainable fruit and vegetable gardens and uses eco-friendly wine producing methods. The wine from Chateau Val Joanis was once sipped by the Romans and the Chateau still features visible remains of the Roman Villa that once existed there. We know Angie follows an organic diet, this will be a great compliment to also bring the green value back to wine making.

In 2008 Ms. Jolie earned praise for visiting Afghanistan to assist refugees, a trip that took place only a few months after she gave birth to twins. Ms. Jolie and her partner, Brad Pitt, also donated $3-million through their foundation to benefit Ethiopian children and young victims of the Iraq war. Recently,  along with Brad, she supported Wyclef’s Clean Streets Project — an initiative that helps clean garbage from the streets of Port-Au-Prince Haiti employing over 600 workers per day.

It’s no wonder that Angelina Jolie for a second year in a row topped the AlertNet’s list (Foundation to cover international aid) for the most respected celebrity humanitarians of 2008. Angie is also listed among the top celebrity philanthropists, donating her time and money to bringing growth and sustainability to the third world.

I think this super hero dual is a match made in heaven! All the best Brad and Angelina on your green eco fight. I’m behind you all the way!